Things to do when it's fine

Things To When It's Raining      Coastal Walks 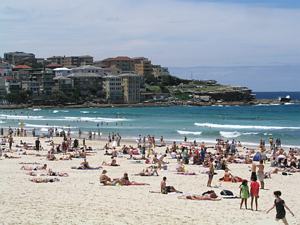 
Bathe between the red and yellow flags. Lifesavers on duty will enforce this rule.

Australia has a long tradition of volunteer lifesavers patrolling the beach and rescuing people in trouble.


Body surfing is where you catch waves without a proper surfboard. A float made of plastic foam or a blow-up surf-o-plane sure helps.

The serious surfers all have surfboards and the right clothes. It's an enormous sub-culture with its own language, web sites, magazines and newspapers. Enquire about lessons at the Pavilion.


It's pretty easy, just roll out your beach towel and lie in the sun. Best apply some sunscreen lotion, and if you don't already have a tan, then 20 minutes is the limit.


The main shopping centre for Bondi Beach is in Hall Street. All the essential shops are there, including a couple of bargain stores, two bookshops, two newsagents, and two hardware shops.

Bondi Junction is the regional shopping centre for the Eastern Suburbs of Sydney. All the larger retail stores are there.

Bondi Road is a traditional strip shopping centre, with all the shops along the main road, spread over several blocks, and no shops in the side streets.

More things to do


Get up and get down to the promenade about 7am and you'll see another Bondi. The locals running and jogging and exercising before they go to work. It's actually their beach.

Get up before dawn


This is a bit harder; perhaps you'll have to stay up all night. In summer dawn is around 5am, so get down there about 4:30 am and you'll see the sun rise out of the sea.

Most people have never seen it. The last time I the sun rise was at the start of the new millennium.


There are souvenir shops everywhere. Whilst most of it is mass produced, if you potter around you will find unusual local clothes and local pottery, stuff that will serve you well. Buy a beach towel or a teatowel with Australian designs.


The Waverley Council publishes a brief dining out guide. Copies are free at the Pavilion shop.

They list 102 cafes, take-aways and restaurants close to Bondi Beach, plus another 17 at North Bondi, not to mention 43 along Bondi Road and over 100 up in Bondi Junction.

Sad to report, there are no old-fashioned milk bars, tea rooms or home style cooking cafes like there used to be 70 years ago. The last milk bar closed about 10 years ago, but now there are plenty of good coffee shops with interesting snacks and light meals. Quite a few have free wi-fi.


Walk round the block


This is not as silly as it sounds. It will take 20 to 30 minutes and is a good way to get oriented. Start at Ravesi's Hotel at the corner of Hall Street and Campbell Parade. Walk one block along Campbell Parade until you reach the Bondi Hotel and Curlewis Street. Turn left.

Walk one very long block to a set of traffic lights at Glenayr Avenue. If you look across to the right you can see the Beach Road Hotel, and be aware that there are more restaurants and shops just out of sight down the hill. Turn left at these lights.

Walk one block uphill to reach the intersection of Glenayr Avenue, O'Brien Street and Hall Street. Walk down Hall Street towards the water and you'll be back at the starting point.


Walk along Campbell Parade heading north. Follow the bus route until you reach the North Bondi bus terminus and a small cluster of shops. Turn right and head east down any of the streets until you reach the point which is called Ben Buckler. At the end, veer right and head down towards the water. Check out the large rock said to have been tossed out of the sea during a storm in 1922. Take some picture of Bondi Beach from this vantage point. Head back to Bondi over the rocks and along the paths.


There is a well-established pathway along the cliffs from Bondi to Tamarama.

From Bondi Beach, walk south. The cliff path starts just past the Bondi Icebergs club in St Neots Avenue. This club is clearly visible from anywhere on Bondi Beach. It takes about 30 to 40 minutes to reach Tamarama.

Bronte is the next beach south of Tamarama. Head south across the Tamarama beach and go up the steps to reach the roadway. Follow the road around the coast, and Bronte is just around the corner.

At the other side of Bronte Park there is a bus terminus and nine cafes in a row.

Coastal walk north to Watsons Bay and The Gap


It is possible to walk all the way from Bondi Beach to Watsons Bay and on to the South Head of Sydney Harbour. Part of the walk is along surburban streets but much of it is now along paths and boardwalks constructed along the cliff top.

Fron Bondi Beach, head north along Campbell Parade. Follow the bus route up to the North Bondi terminus, and from there follow Military Road which is the main road that heads north.

After the golf course, turn right into xx street. Sign ??? At the end of this street, walk through into the clifftop reserve and turn left.

Follow this path all the way to Watsons Bay.

Walk down from Bondi Junction to Bondi Beach


Starting in Bondi Junction, head east along Oxford Street until you reach a big intersection with lights where Oxford street becomes Old South Head Road and intersects with the Bondi Junction Bypass and Bondi Road. Here you have a choice of two walks.

Bondi via Bondi Road. Turn right, walk up the hill to the crest and then veer to the left. Once you reach the crest it's downhill all the way to the beach.

At this point there is a primary school on your right. Just before the school is a small street called Bellevue Park Road. This street leads to a small park with great scenic views of Bondi Beach.

Birriga Road winds around and gradually down to a set of traffic lights. Cross at the lights and head down Curlewis Street. At this point Bondi is an easy stroll of three blocks.

Both these walks take about 35 to 40 minutes.


Most of Bondi Beach was built between 1905 and 1935. Any newer buildings have replaced earlier buildings. There is some amazing stuff in the back streets. Try "Spanish Mission Bondi" or "Matilda Street Bondi 1927" in Google.

On Bondi Road there are many earlier buildings because the trams came down Bondi Road as far at the Royal Hotel in 1894, at a time when Bondi Beach itsely was still sandhills and "mixed bathing" was not allowed.

In Bondi Junction it's all high rise and office blocks these days; very little old stuff remains. However some of the old buildings are amazing to behold.

Just to get started, one idea is a walk down Bondi Road to Bondi Beach.

Walk across to the Sydney Harbour at Rose Bay


Start from the Bondi Hotel at the corner of Campbell Parade and Curlewis Street. Walk up Curlewis Street to the second set of traffic lights. You should be able to see the golf course across the road on your right.

Cross the road and walk along O'Sullivan Road, with the golf course on your right. It's about six blocks to the harbour. You will come to a small shopping centre at Plumer Road, with two good cafes, a newsagent and a cake shop. At this point you can see the harbour at the end of O'Sullivan Road.

When you reach the water, there is yet another cafe. Cross over and turn right, walk along the esplanade until you reach the Rose Bay shopping centre, about 4 blocks.

At Dover Road, in the middle of Rose Bay shops, there is the Rose Bay Hotel and a good coffee shop on the corner. In behind there is a cheap supermarket and a greengrocer.

One thought is to buy a sandwich and a coffee from the deli and then go down the laneway directly opposite the hotel. In one block you are in a little park right at the water's edge.

To walk back to Bondi, head up Dover Road and walk until you read the set of lights. This is Old South Head Road, turn right and head towards the city. After about eight very short blocks, turn left into Warners Avenue. This street goes right through to the north end of Bondi Beach.


The big three clubs at the beach are the North Bondi RSL, the Icebergs at South Bondi and the Bondi Bowling Club.

With the exception of the North Bondi RSL, and the club at Charing Cross which often has great music on a Friday night, all these clubs essentially cater for people over 35.


Right on the corner of Hall Street, Ravesi's Hotel is the place to be seen having a drink. The Swiss Grande is a large hotel catering for tourists. The Hotel Bondi is right on Campbell Parade has a lot of bars and pub-style bistro food.

The Beach Road Hotel, formerly The Regis formerly The Rex, is a couple of blocks back from the water. It has a large dining area downstairs, and live music upstairs most nights.

Up on Bondi Road, the only hotel is The Royal. Accommodation, food and some live music.

The are a lot of hotels in Bondi Junction. The most well known is the Tea Gardens Hotel, not to mention The Cock and Bull (formerly The Grande) which is the local Irish Pub. If you can pass the style police, The Eastern (formerly Billy the Pigs) is the place for you. Other local watering holes include The Nelson near the Waverley Bus Depot, and The Mill Hill Hotel (formerly the Denison Hotel).


The old favourites include the Bamboo Bar in Hall Street (currently closed during a re-development) and a couple of wine bars, with one in O'Brien Street and one in Curlewis Street. The latest addition is the Bavarian Beer Cafe right on Campbell Parade.

There is also a mysterious doorway for entry into the Players Lounge in Curlewis Street.


Things To When It's Raining      Coastal Walks